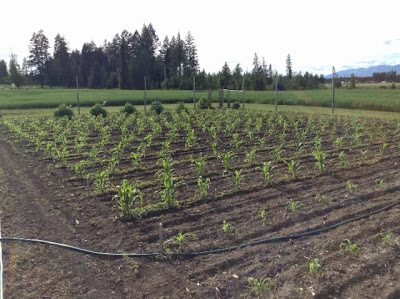 After several years of raising produce to sell at local farmers' markets, in 2014 we decided to try out a different business model: the CSA.

CSA stands for Community Supported Agriculture, and is an increasingly popular means for creating a financially sustainable, highly efficient, farm-to-table relationship between growers and consumers. Individuals or families buy "shares" in a farm's produce before the growing season begins. This entitles them to a certain amount of each week's harvest throughout the season, usually 20-22 weeks. 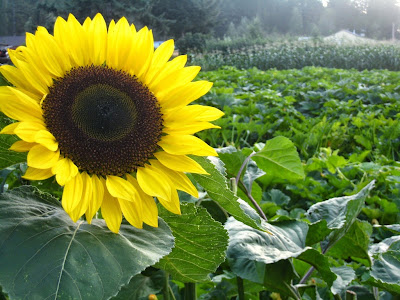 The CSA model allowed us to get produce to customers within 24 hours or less of harvesting, meaning better quality for them, and less handling for us.

It also allowed us to reduce waste. Market demand doesn't always match up well with crop production. It's never a good thing to have a bumper crop of green beans when shoppers are more interested in tomatoes. With the CSA model, our surplus became our shareholders', allowing them to have extra to give to friends and family, or even to try their hands at canning or freezing.

From a financial perspective, the CSA model provided income for us during the time of year when expenses are highest and revenue lowest: late winter and early spring.

By the summer of 2015, our shareholders had quadrupled. By the fall of 2015, we realized that running a CSA was not a sustainable proposition for our family. We were at the point where we could easily double our shares again, but not without hiring outside help. Up to this point, it was just us and our kids. And we were tired. 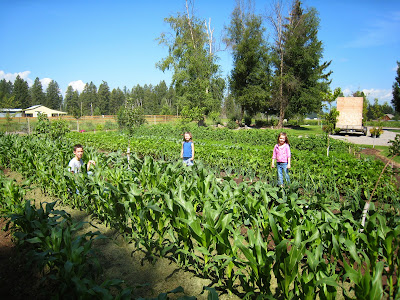 After much prayer and discussion, we decided to shut down the CSA. And while we knew it was the best thing for our family, especially our children, we also knew that this choice would result in the loss of a big part of our annual income.

That brings us to 2016 and the pumpkin patch. This one crop promised to fill much of what we gave up in closing the CSA.

The weather had been unusually warm and dry since March, seemingly skipping right over spring into summer. So it was with cautious optimism that we moved forward with our planting. The gardens were in and growing beautifully by June, thriving in the unseasonably warm temperatures.

The pumpkin plants were doing exceptionally well, and we took great delight in looking out on the vast patch, dreaming of the bountiful fall harvest it would produce. 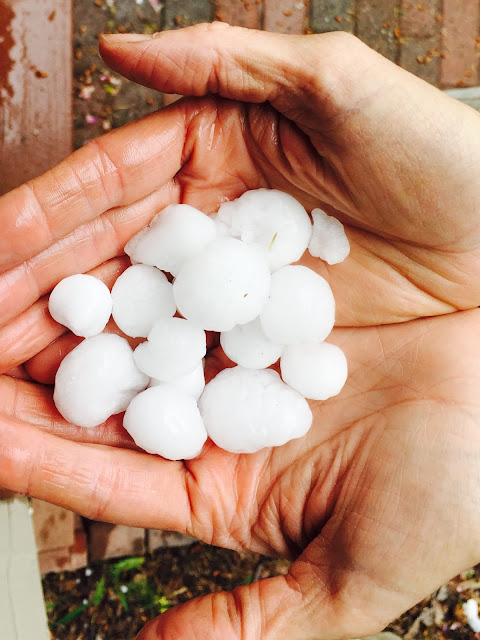 It was June 8, our eldest son's 16th birthday. Temperatures had dropped slightly from the few days prior, from the 90's into the high 80's. The afternoon air was hot and still. Suddenly, a strong, cool breeze began to blow from the west. From inside the house, we could hear it rushing through the trees, breaking the heavy silence.

Then the first hailstones began to fall, pinging, thumping, and cracking in a frenzied percussion off roof and rock and table and tree. As the few rapidly became many, my brain finally engaged: I had to get the cars under cover.

Throwing a Carhartt coat over my head, I ran outside. Though my car was fewer than twenty feet from the door, I felt the stinging impact of dozens of large hailstones pelting down upon me.

As I pulled my car under cover of the large evergreen closest to the house, Dan came running from the back yard with the same intent, quickly parking his truck under a stand of smaller trees at the far end of the house.

We raced back to the shelter of the front porch. Breathlessly, we watched as our yard and gardens were covered in a solid layer of hailstones.

It was one of the children who first verbalized the thought racing through my own mind, "What about the pumpkin plants?"

From where we stood, we could see the east end of the patch, buried in an unbroken field of icy white. 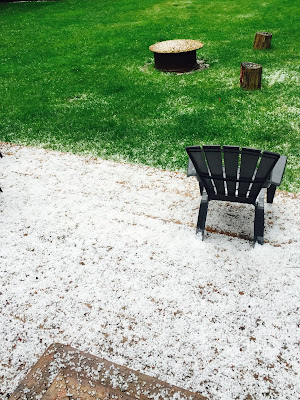 I was fighting tears. What could I say? I didn't even know what to tell myself. Then these words came. Choking down a sob, I uttered the only words that made sense. "The Lord gives. The Lord takes away. Blessed be the name of the Lord."

I have come to believe that farming is an exercise in faith made visible. We can provide the right conditions. We can follow calendars and guides. We can water, and weed, and fertilize. But what we cannot do is actually MAKE something grow. That, alone, is God's responsibility. And we cannot control the weather. That is God's domain. Crops that take months to come to maturity can be wiped out in a matter of minutes.

What can we do in the face of such losses? We can do no more, nor do no less than what we do in the face of great gain. We give thanks to God for His mercy and goodness. Even this storm, I assured my children (and myself) was part of God's sovereign plan. We didn't have to understand it, or even enjoy it; we merely had to accept it and trust in the One who allowed it.

The hail stopped almost as quickly as it began. Within minutes, the sun was out, rapidly melting away the chunks of ice that littered the yard. 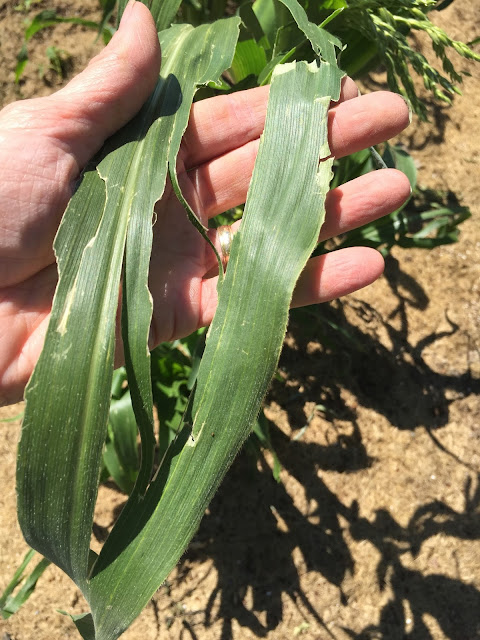 Miraculously, the leaves of the pumpkin plants somehow escaped severe damage from the hail, even as the large maple trees in the center of our yard were nearly stripped of their new foliage. In the weeks following the storm, the plants continued to grow at an amazing rate, their leaves becoming large and lush.

Then, on July 16, a second hailstorm hit. Again, we huddled on the porch, our ears ringing with the roar of thousands of large hailstones pounding on the roof. The girls wept. Dan looked on, ever so slightly shaking his head in silent dissent.

When it was over, one of the kids asked, "Dad, what do we do about the pumpkin patch?"

As I watched him walk across the yard to begin surveying the damage, I knew that his heart felt the same burden as mine: losing those pumpkins meant losing money that we desperately needed. 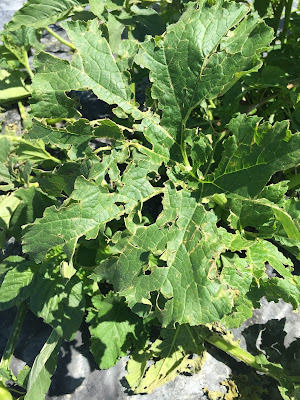 But even as my mind began spinning with all that this was likely to mean for us in the coming months, again these words came to my mind.

"The Lord gives. The Lord takes away. Blessed be the name of the Lord."

"Dad's right," I said, as started after him across the yard. "We just have to keep moving forward. We can only do what we can do. God will do the rest."

Together, the kids and I walked to the pumpkin patch. The huge plants, that had just minutes before been so vibrant and healthy, now lay nearly flattened, leaves shredded and stalks crushed.

Posted by Motherfish at 4:55 PM 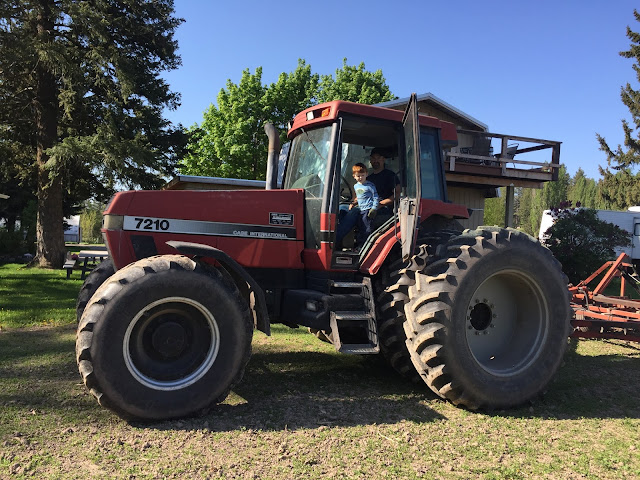 I began to have my doubts about our "little garden" the moment this pulled into the yard. Grandpa upgraded his small, blue Ford tractor to this great, red beast. There were few complaints from Dan and Henry though, and the ground was tilled in a matter of minutes. 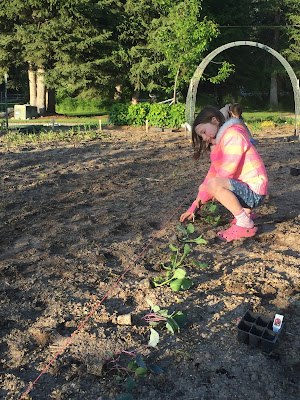 Once the pumpkin patch was planted, we moved on to what was to be our main, family garden. This little patch of ground, on the southwest corner of our farm, has the richest, most fertile soil on the property. We have had success with nearly everything we have ever planted here.

Having started nearly all of our veggies eight weeks earlier in the greenhouse, putting in the garden was an exercise in (near) instant gratification. It took just an hour or two one afternoon to set out the majority of the plants. 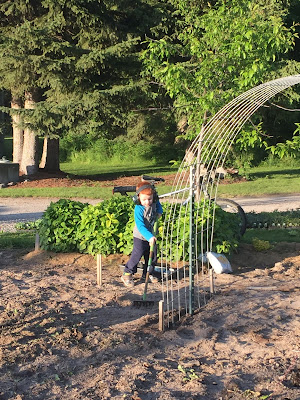 This garden was certainly small by our usual standards. Four rows of corn, instead of twenty. One row each of carrots, beets, lettuce, and peas, instead of four or more. Everything was scaled back, and it was quite pleasing, especially after Dan added two arched, wire trellises on which to grow the beans.

Since we had room, and it was just for us, I decided to try a few new crops. The biggest surprise, by far, was celery. For some reason, I had it in my mind that celery was one of those plants that preferred long, hot seasons, growing best in places like Texas and Southern California. 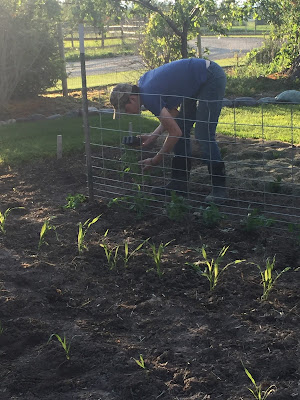 I am so glad I was wrong! From this point forward, as long as it's up to me, there will be celery in our garden every year. I had no idea it could have so much flavor!

I was able to cut what I needed from the plants all through the summer and fall. And when it was time to plow the garden under, I simply cut off all the remaining stalks, washed them, cut them up, and put them in freezer bags. Easiest preserving I have ever done! All winter long, whenever I made soups or stews, I just scooped out what I needed from the freezer.

I finished the last of the celery a couple of weeks ago, and that last serving was as flavorful as the first. This year I will double the amount that I freeze. It's that good! 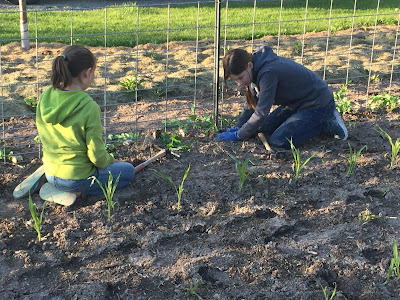 The other big surprise of the season was our onions. We plant them every year, but this is the first year I have tried large, storage onions. We planted them from sets, and by late summer/early fall, they were huge! Those that I didn't use in canning pickles and relish, have kept very well through the winter months. If time allows this year, I plan to put up jars of pickled onion slices for sandwiches and salads.

Even as we were setting out the plants last spring, we talked eagerly about what were most excited to harvest and eat. We laughed at the fact that all of this talk was making us hungry. There is no doubt that our kids enjoy living an authentic "farm-to-table" lifestyle. 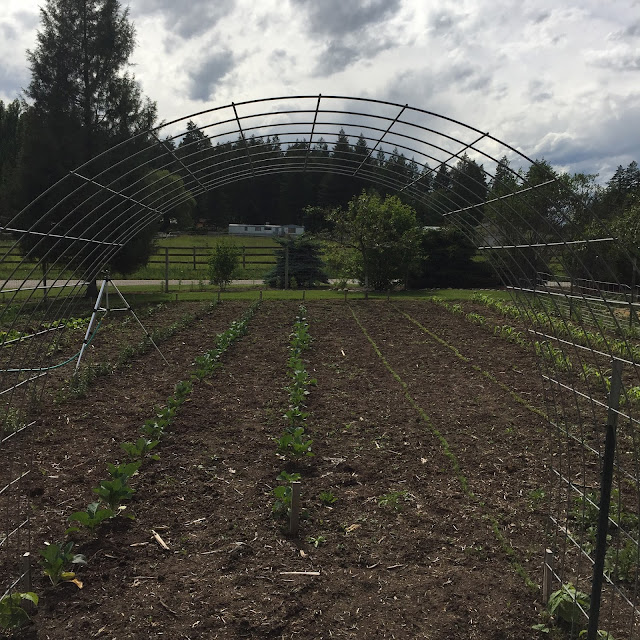 As we wrapped up the planting that evening, looking with satisfaction on the work accomplished, we imagined the weeks ahead to be ones of relative luxury, with only the daily watering and occasional weeding to do.  It was shaping up to be the best year yet.

Posted by Motherfish at 9:30 PM